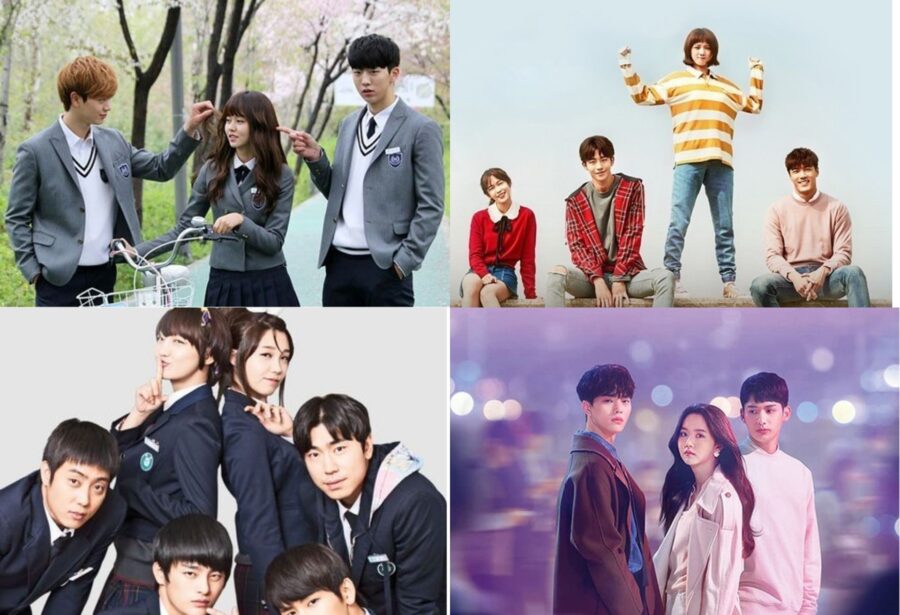 If you enjoy watching high school/College k-drama and looking for some dramas like True Beauty, we have a list of the 10 best high school k-dramas for you.

1. My ID Is Gangnam Beauty

My ID Is Gangnam Beauty is a uni drama tells the story of Kang Mi Rae, a girl once bullied for her looks. As a result, she became insecure, cautious around people and withdrawn. However, Mi Rae decides she wants a fresh start away from bullying and gets plastic surgery to transform her face. When she begins university, she meets Do Kyung Suk from their middle school days, who sees people for what they are on the inside and not the outside; he then becomes attracted to Kang Mi Rae.

Adapted from the manga series “Boys Over Flowers” written by Kamio Yoko. boys Over Flower is a high school drama about a girl Geum Jan Di who comes from a poor family who owns a dry-cleaning shop. Jan Di receives a swimming scholarship and starts attending the school. In school, she meets the notorious F4, the most popular and powerful group of boys at the school, Her life at school starts out miserable, as she doesn’t fit in with other students because of her status, and later becomes worse when she is labeled as the new bullying target of the F4.

A slice-of-life story about five college students who connect over the growing pains in their youth. A cheerful, upbeat, youthful drama featuring five women roommates living in the same house, each with her own personality, dating style, taste in men, and area of expertise. It’ll deal with a variety of issues that modern women deal with, whether it’s dating or sex or interpersonal relationships.

KBS2  2022 drama Dear M adapted from the web series “Love Playlist.” this series tells story about Campus life at Seoyeon University which always been relatively peaceful, but when an anonymous post pops up on the school’s online community, the entire campus is flipped upside down. Posted by a mysterious individual, known only as “M”, the entire school is abuzz with curiosity and excitement. Determined to uncover the identity of the mysterious “M”, students all across the campus set out to uncover the truth. But the task will prove to be anything but easy.

What would you do if you found out that you were in fact a character in a comic? And an extra character on top of that? Change the course of the story, obviously Eun Danoh is a 17 year old high-school student from a wealthy family who suffers from a lifelong heart condition that inevitably means she will not live past her teenage years she is determined to find true love in her own plot-line and circumvent the author’s plans for her character by utilizing the flashes of storyboard she alone is able to see.

Cha Heon is a student at Chun Ji High School who has both good looks and brains. He appears to be a cold character, but he is actually someone with a warm heart who is awkward at expressing himself well. Shin Sol Yi is a bright and bubbly 17-year-old who has a crush on Cha Heon. She openly confesses her love to Cha Heon continuously, and she is a clumsy but lovable character.

A high school drama Love Alarm tells a story about Cellphone app Joalarm is created. If someone likes you and they are within 10 meters of you, the alarm for the app rings. The app also shows how many people like you, but the app doesn’t reveal specific details on who likes you.

Sekang High School is the most prestigious private high school in Seoul’s Gangnam District, and Go Eun Byul is the most popular girl there. Meanwhile, her identical twin Lee Eun Bi is living in an orphanage and is being bullied at school. Then one day, Eun Byul mysteriously disappears. Soon after, Eun Bi loses her memories and is mistaken as being Eun Byul. Eun Bi then starts living her life as Eun Byul.

My all time fav and highly recommended high school drama, “Reply 1997” story focus on the extreme fan culture that emerged in the 1990s when idol groups took center stage and K-pop was blossoming. Moving back and forth between the ’90s and today, the story centers on the life of Seong Si Won (Jung Eun Ji), who idolizes boyband H.O.T, and her 5 high school friends.

This drama is inspired by the life of South Korean Olympic weightlifter gold-medalist Jang Mi-Ran and it’s about college athletes who fighting for their dreams and finding love.