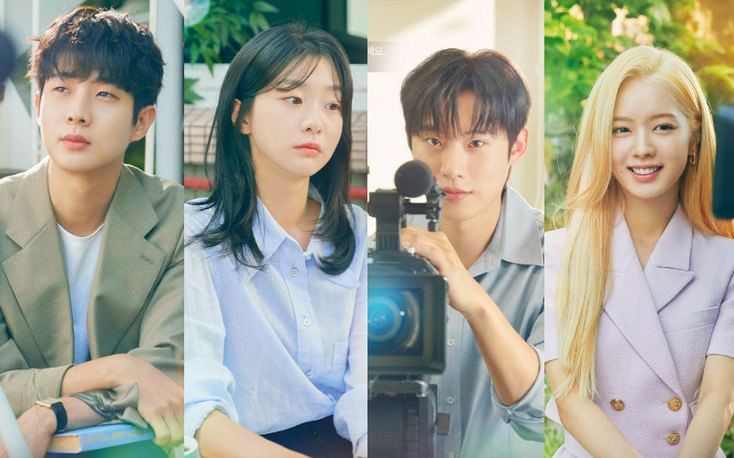 A coming of age romantic comedy that revolves around Choi Ung (Choi Woo-shik) and Kook Yeon-Su (Kim Da-mi), ex-lovers who broke up with a promise to never meet again. As luck would have it, the documentary they filmed ten years ago in high school went viral and they are forced to face the cameras together again by their producer friend Ji-ung who seems to have feelings for Kook Yeon-Soo. The series depicts their complicated feelings and growth.

Choi Ung – I’m always the first thing you abandon when things get tough. Am I the easiest thing you have that you can throw away?

Kook Yeon-Su – No, you’re the only thing I can throw away.

Kook Yeon-Su – I’ve always thought that my dream was to live an average, normal life. Maybe this wasn’t what I wanted. Maybe I never had a choice to begin with.

Kook Yeon-Su – The reason why we broke up… was because of my pride. It was my pride that told me that I could live without you.

Ji ung – Anything I can’t control is just a risk. Back then and even now, yeon-su is someone like that to me.

Kook Yeon-Su – The reason why we had to break up was… Because we live in two very different realities. Rather, it was because my reality was pathetic. Actually… It’s because life alone was too much of a burden for me. To be completely honest, I was afraid you’d eventually notice my inferiority complex.

NJ – Why can’t people understand me? And why are they so quick to judge?

Choi Ung – you don’t need their understanding. There’s no need for you to do that. Who cares? Let them see and believe what they want. It’s fine as long as you understand yourself. That’s already hard enough.

Choi Ung – it’s okay to be alone from the start. You’d be used to it. But being alone after being with someone isn’t something I want to experience again.

Kook Yeon-Su – There was a specific answer that I wanted to hear from him. I could feel that he liked me a lot. How should I put it? He never said the most important thing. He can’t be that dense, can he?

Kook Yeon-Su – We’re not going to break up. If we fight or break up again. Just come to me like you did today.

Choi Ung – And then?

Kook Yeon-Su – And then I’ll grab onto you and never let go.

Kook Yeon-Su – I think I love you. Did you know that?

Choi Ung – She was always like that. At times, she’d feel extremely distant. Other times, she’d pull me closer and make time stop.

Kook Yeon-Su – Hey, are you really stupid? Why would we break up?

Choi Ung – Then you should have told me instead of making me feel anxious.

Kook Yeon-Su – Must I say it out loud?can’t you tell?

Interviewer – why aren’t there people in your drawings?

Choi Ung – l love things that don’t change but people change Or disappear over time. That’s why there are no people or time in my works.

Kook Yeon-Su – To avoid getting hurt… I hurt the people I loved.

Kook Yeon-Su – I had forgotten… Who I was in love with. Whether he changed or not doesn’t matter. It was Ung. I just loved him for who he was.