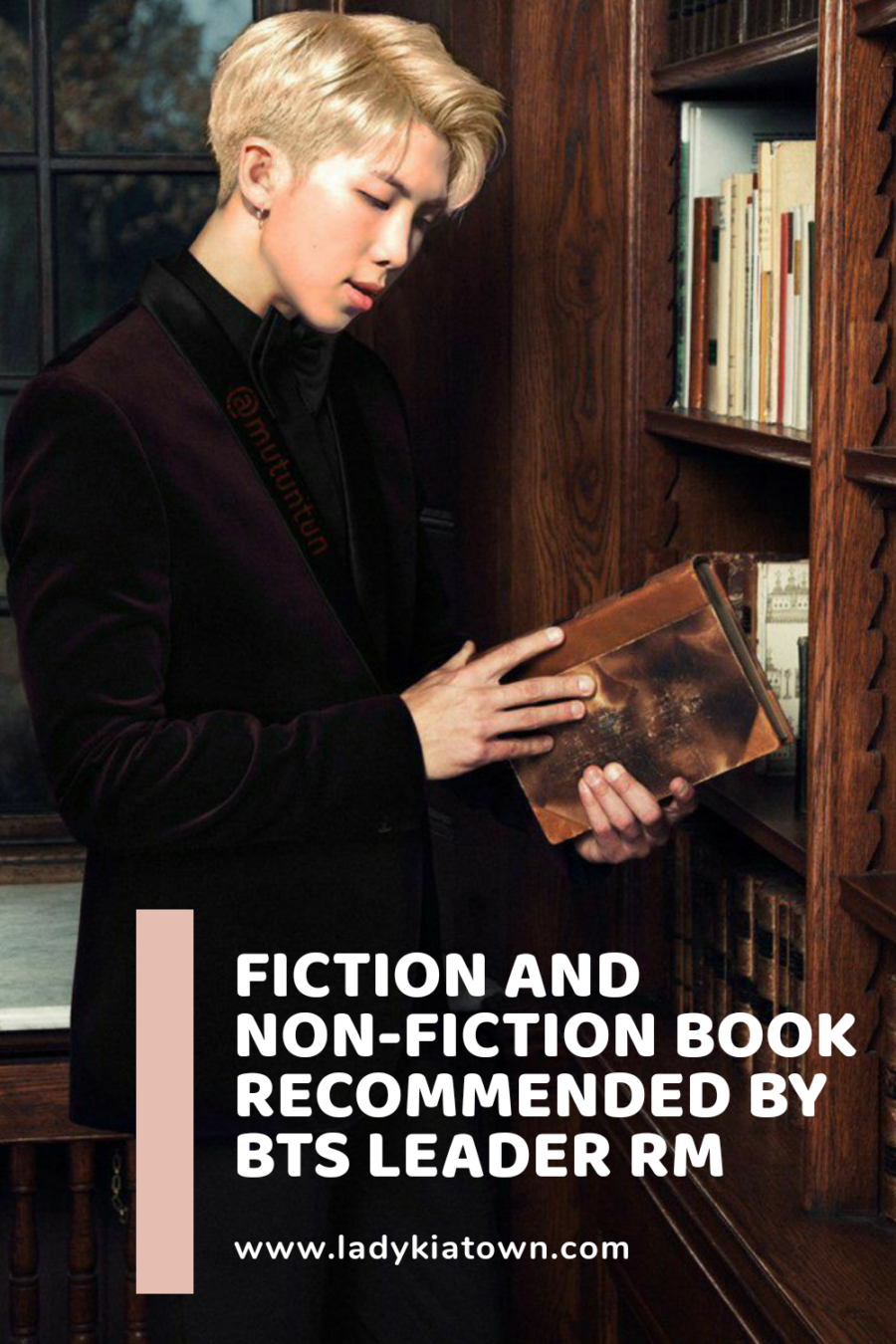 A person’s bookshelf tells a lot about that person that as you know BTS members are love to read and their many songs are inspired by book too.

I already write a blog post about book recommendation by BTS members and his song and book connection but as I told you RM aka Namjoon is a huge reader and highly intelligent.

Reading books, novels, poetry it’s like a part of his daily life routine that stand out RM from rest of the BTS members.

He also love to share his favorite books to army and his reading list obviously too long. I am constantly amazed by RM’s philosophy and characteristics, so I always look forward to know the kind of Fiction and non-fiction books he reads.

So because of this I wanted to write seperate blog post for book recommended by RM. May be after we read these books we can understand better our BTS leader and his amazing, unique concept.

I made a list of fiction and non-fiction book recommended by RM. I hope you find some new book to add on your favorite reading list.

If you planning to read Murakami, I recommend start with Norwegian wood and than Kafka on the shore or other book that way you can understand better Murakami work.

Norwegian Wood By Haruki Murakami : The Best Quotes About Love, Life And Death

It’s a Korean book which is translated by Jamie Chang

The story-line centres on a housewife who becomes a stay-at-home mother and later suffers from depression. It focuses on the everyday sexism the title character experiences from youth. (Source)

there is a movie adaptation based on this book which is released last year. Starring Jung Yu-mi and Gong Yoo.

Me Before You by Jojo Moyes

20 Most Memorable Quotes From “Me Before You” by Jojo Moyes

Lou Clark knows lots of things. She knows how many footsteps there are between the bus stop and home. She knows she likes working in The Buttered Bun teashop and she knows she might not love her boyfriend Patrick.

What Lou doesn’t know is she’s about to lose her job or that knowing what’s coming is what keeps her sane.

Will Traynor knows his motorcycle accident took away his desire to live. He knows everything feels very small and rather joyless now and he knows exactly how he’s going to put a stop to that.
What Will doesn’t know is that Lou is about to burst into his world in a riot of colour. And neither of them knows they’re going to change the other for all time.(Source)

Hermann Hesse’s novel Demian tells the story of a young boy named Emil Sinclair and his childhood growing up during pre-World War I.

Emil struggles to find his new self-knowledge in the immoral world and is caught between good and evil, which is represented as the light and dark realms. (source)

This book has inspiration for their music video “Blood, Sweat & Tears,” if you read this book you would know many of scene in this mv inspired by this book.

The Unbearable Lightness Of Being by Milan Kundera

The novel pivots on Tomas, a surgeon and serial adulterer who embraces “lightness.” He is willfully free of all heaviness, shunning labels and ideals, and he justifies his physical unfaithfulness (mere sex) on the basis of his emotional faithfulness (his love for his wife). (source)

The Catcher in the Rye by J. D. Salinger

The novel details two days in the life of 16-year-old Holdenf Caulfield after he has been expelled from prep school. Confused and disillusioned, Holden searches for truth and rails against the “phoniness” of the adult world. He ends up exhausted and emotionally unstable. The events are related after the fact. (Source)

When sixty-nine-year-old So-nyo is separated from her husband among the crowds of the Seoul subway station, her family begins a desperate search to find her. Yet as long-held secrets and private sorrows begin to reveal themselves, they are forced to wonder: how well did they actually know the woman they called Mom?

Told through the piercing voices and urgent perspectives of a daughter, son, husband, and mother, Please Look After Mom is at once an authentic picture of contemporary life in Korea and a universal story of family love.(Source)

It’s a novel written by Japanese author Banana Yoshimoto (1988) and translated into English by Megan Backus in 1993.

In Kitchen, a young Japanese woman named Mikage Sakurai struggles to overcome the death of her grandmother. She gradually grows close to one of her grandmother’s friends, Yuichi, from a flower shop and ends up staying with him and his transgender mother, Eriko. (source)

This is the recent novel that RM read and recommend to his army.

Almond by korean author Won-pyung Sohn The Emissary meets The Curious Incident of the Dog in the Nighttime in this poignant and triumphant story about how love, friendship, and persistence can change a life forever.

This story is, in short, about a monster meeting another monster.

One of the monsters is me. (Source)

I Want to Die but I Want to Eat Tteokpokki is a book originally written in Korean, about a woman diagnosed with dysthymia. Baek Se-hee wrote the dialogues during her sessions with a psychiatrist, and included her inner thoughts on how she wants to love herself better. (Source)

ARMYs noticing Namjoon (RM ) placing this book on his bed from a video clip of BTS and I really wanted to read this one.

“The Ones Who Walk Away from Omelas” is a short story originally published in the collection The Wind’s Twelve Quarters.

I actually decided to read this short story because BTS, created a song and music video based on the concept of this story.

I loved the prose, and the message really makes you think. I also recommend reading the author’s notes at the end of the story Very insightful.

It is a memoir about his life and illness, battling stage IV metastatic lung cancer. It was posthumously published by Random House on January 12, 2016.

Breaking Out of the “Man Box”: The Next Generation of Manhood by Tony Porter

Breaking Out of the Man Box boldly exposes the connection between male socialization and the quest to end violence against women and girls. Porter provides an honest and transformative experience, empowering men to create a world where men and boys are loving and respectful—and a human race where women and girls are valued and safe.

RM recommend and read this type of book says a lot about how thoughtful and good person he is.

Into The Magic Shop by

The book is a true story about the author, starting with him as a boy. An unknown woman displays an act of compassion, teaching the boy little known secrets that encourage the heart and mind to work in unison, leading to a healthier and happier life.

Interesting to know that BTS song Magic Shop inspired by this book and of course BTS tell his fan about that and since this book sales have increased 510 times and become bestseller in Korea.

Written for highly sensitive people, the book explains the characteristics of being highly sensitive and how to overcome common difficulties, such as low self-esteem and the exhausting effects of socialising.

Ilse Sand also encourages you to explore and appreciate the advantages of high sensitivity, including your aptitude for depth, intensity and presence, and suggests activities to calm and inspire. (Source)

The conversations between Hockney and Gayford are punctuated by surprising and revealing observations on other artists―Van Gogh, Vermeer, and Picasso among them―and enlivened by shrewd insights into the contrasting social and physical landscapes of Yorkshire, Hockney’s birthplace, and California. 181 illustrations, 154 in color

Army caught RM reading this book and found this photo from twitter during my research.