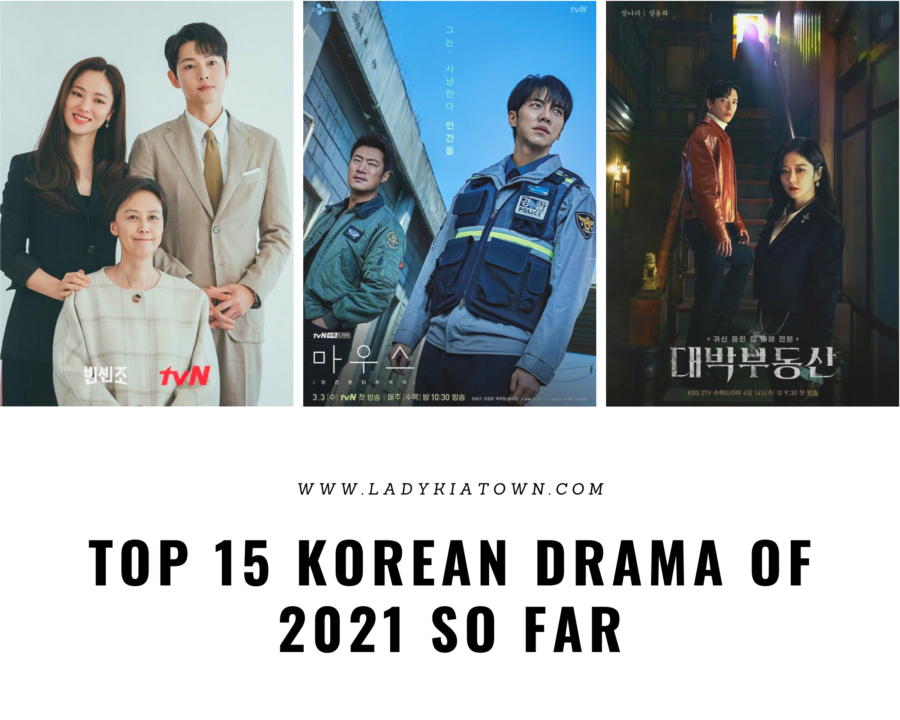 So we already in second half of the year and just in 6 month down 2021 has already give us a lots of good drama. I make a list of my top 15 korean drama so far that includes both underrated and popular kdrama so make sure to read full article to check how many you’ve seen and how many you’ll add on your watchlist ☺

True Beauty is a romantic comedy about a high school girl Lim Ju Gyeong, who rises to pretty girl fame after she masters the art of make-up from YouTube. She turns into a goddess because of her makeup skills, but would rather die than reveal her bare face to anyone. It tells her love story with the only boy that saw her without makeup, Lee Su Ho. Lee is an attractive and handsome boy who appears cold because of his dark past but is actually very caring. They grow when they meet each other sharing their secrets and finding love with each other, but can Su Ho make Ju Gyeong find her true beauty?

14. She would never know

Ji Ah ( Jung Na Ra ) , a woman who has inherited exorcism abilities from her mother, is the owner of Daebak Realty, a company that specializes in selling haunted houses. Ji Ah looks perfect and is also brilliant, but her hot temper makes her fists fly before her words. One day, Ji Ah encounters a conman named In Beom ( Jung Yong Hwa ) who specializes in exorcism fraud. Late at night when Daebak Realty operates, In Beom visits Ji Ah to make an offer. He suggests that they team up to exclusively sell houses that are haunted by vengeful spirits and lingering ghosts. Can the two get along well and deal with house prices, ghosts, and their sorrowful stories?

12. Doom at your service

Tak Dong Kyung ( Park Bo Young) has been working hard ever since her parents passed away. Her life seemed more stable after working as an web novel editor for 6 years, but then she gets diagnosed with a brain cancer. She blames her unlucky life and wishes to curse everything to disappear, which unintentionally calls Myeol Mang ( Seo In Guk ), a messenger between humans and gods, to appear. He says that he can grant her wishes. As her last hope, she makes a contract with Myeol Mang for a hundred days to live how she wants, risking her everything.

11. River where the moon rises

Adapted from the novel “Princess Pyeonggang” (평강공주) by Choi Sa Gyu (최사규). This story is about a Princess Pyeong Gang ( Kim So Hyun ) is a woman with big dreams and limitless ambition. Determined to become the first Empress of Goguryeo, Pyeong Gang will stop at nothing to make her dream come true.However, things take an unexpected turn, the day she meets On Dal ( Na In Woo ), a peace-loving man, whose sole goal in life is to live in harmony with those around him. On Dal is the exact opposite of the ambitious princess. He is a oasis of calm amid the turbulent storms in Pyeong Gang’s life. The warrior princess soon finds herself falling for gentle On Dal.

The students and Faculty of South Korea’s top law school become involved in a highly unusual case. It’s involved with many secret and story keep getting interesting with many plot twist. Starring Kim Myung Min, Kim bum and Ryu Hye Young if you love law drama with lots of mystery then this drama is must watch for you.

In May of 1980, amidst the heated passion and cries for democracy that reverberated throughout Gwangju, Hee Tae ( lee do hyun ) a top student of Seoul National University College of Medicine and Myung Hee ( go min si ) a nurse find themselves in a twist of fate.

Adapted from the original webtoon of the same name by Carlos and Keukeu Jae Jin. Taxi driver is a story about secret organization that avenges victims whom the law didn’t protect. This drama is must watch If you love crime and action drma with mystery and suspense.

What happen when a top a kpop star fall in love with his anti fan. Adapted from the Korean novel of the same name, which was made into a webtoon. This drama give us a light breezy romance kind vibe and it’s also introduce us the hardship that kpop idols are facing in their daily life.

A suspenseful story that asks the key question, “What if we could identify psychopaths in advance?” A crazed serial killer’s ruthless murders have left the entire nation gripped with fear, and chaos reigns. Justice-seeking rookie police officer, Jung Ba Reum, comes face to face with the killer. While he survives his dangerous encounter with the psychopath, Jung Ba Reum finds his life completely changing before his eyes.

Meet the two fearless men willing to go to extreme lengths in their pursuit of a serial killer that has shaken up their quiet city: Lee Dong Sik, a once capable detective, is now demoted to performing menial tasks at the Manyang Police Substation. Detective Han Joo Won, is transferred in. Joo Won is an elite detective whose father is the star candidate for the National Police Agency’s next chief. Despite his admirable qualities and high social standing, Joo Won harbours a long-held secret. When a string of gruesome killings occurs, a pattern takes shape that is oddly reminiscent of some cold serial-murder cases from 20 years prior. Dong Sik and Joo Won team up, vowing to stop this vicious culprit in his tracks. As their investigation proceeds, they are forced to look far deeper than what the evidence suggests, questioning the culpability of all those surrounding the case, including their own.

After achieve a great success worldwide penthouse return with season 2 to keep story going , Seo Jin and Dan Tae eventually get rid of everyone who was in their way. They shamelessly frame Yoon Hee for the murder of Su Ryeon and even cover up the death of Seol A. The residents of Hera Palace believe everything will return to how it used to be. However, the tides change when Yoon Hee escapes prison and Eun Byeol discovers the truth. Their mysterious fates are still yet to be seen. Will they manage to protect their precious palace until the very end?

Adapted from the webtoon “Navillera” written by Hun and illustrated by Ji Min.

Shim Deok Chool, He is 70-years-old and retired from his job as a post office employee. Due to life situations, he put aside his dream of becoming a ballet dancer and worked a normal job to support his family. Now, Shim Deok Chool makes the decision to pursue his dream again. Lee Chae Rok ( Song Kang ) is a 23-year-old man. His mother was a ballet dancer, but she died from a disease when Lee Chae Rok was young. His father later went bankrupt. Lee Chae Rok learned that he has a talent for ballet, but, after pursuing ballet, he barely has contact with his father and he has a hard time supporting himself financially. Story is about how they pursue their dream this is such a heartwarming drama with a beautiful life lesson that it’s never too late to pursue our dream.

A male chef has risen up the ranks to find a job cooking for the country’s top politicians in the South Korean presidential residences, the Blue House. He is something of a dreamer – but one day finds himself in the body of a young queen from Korea’s past, Kim So Yong. Kim So Yong’s husband is the reigning monarch, King Cheol Jong. However, he is only king in name – the late King Sunjo’s Queen, Sun Won, has taken advantage of Cheol Jong’s better nature, and is ruling the realm in his name. Queen Sun Won’s brother Kim Jwa Guen also has designs on power. However, Kim So Yong soon discovers that King Cheol Jong harbors secrets, and is not as gentle and meek as he seems

Vincenzo is a story about a boy Park Joo Hyeong ( Song Jong Ki ) went to Italy after he was adopted at the age of 8. He is now an adult and has the name of Vincenzo Casano. He is a lawyer, who works for the Mafia as a consigliere. Because of a war between mafia groups, he flees to South Korea. In South Korea, he gets involved with Lawyer Hong Cha Young ( Jeon Yeo Bin ). She is the type of attorney who will do anything to win a case.

Let me know how many you already watched and which one is your favorite.